Recently, we published an article about the ATO cracking down on dodgy labour hire firmsand the negative effects this has for both the companies they’re providing for and the workers alike.

Today, we’ve seen the devastating effects this has had first-hand. In a blog article posted on ‘Technology Dribble’ about reasonably well-known company ‘Labour King’, or dunce as it may happen, they’re allegedly screwing their staff.

In the review the duped worker claims to have worked 10.5 hours, helping to shift 35-tonnes of sand – and over 1-month later he’s still waiting to be be paid.

After being made redundant from a position I held for 14 years, I sank my teeth into every opportunity that came my way. From disability support worker, cleaner, electrician assistant, plumbing labourer to website and software development, I’ve been exposed to a wide spectrum of work in the last 6 months. This experience helped me develop more appreciation for any type of paid work that people do. The simple lesson I learnt was, what looks easy, is usually not, to the untrained.

One of the opportunities that I engaged in was to work for a company called Labour King. I have never heard of this company prior to this and the recruitment process was very sketchy at best. I was instructed by some random to send all my correspondence via SMS (bank details, white card, driver’s licence, super details etc.) which I did hesitantly. Nevertheless, I landed the gig and went to work.

I was one of two labourers hired by Labour King that helped shift 35 tonnes of sand. Sand were packaged in 1 tonne bags, and we had to shovel the sand into formworks that transformed into these sculptures. 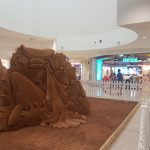 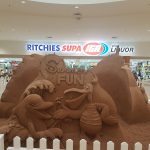 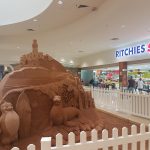 10.5 hours of very hard physical work later. I was instructed, via SMS, to log my time on an online CRM. Pretty painless to navigate so I was quite pleased.

This happened over 1 month ago… and I still haven’t been paid. I probably called Labour King over 5 times to enquire about when I can expect to get paid, to which they modestly replied that they process pay every Friday, and for me to wait. The other 10 times I called just dropped out after being redirected by the receptionist.

I am still patiently waiting to get paid.